A Tale Of Two Hearts - A Gay Indian Wedding That Will Make Your Day! 🏳‍🌈 | Wedding Tips ARE YOU A VENDOR?
The Bride

A Tale Of Two Hearts - A Gay Indian Wedding That Will Make Your Day! 🏳‍🌈

By Vidhi Maingi Gaur June 5, 2019 0
Saved
From Var-Daan to Aashirwad, here's a gay Indian wedding at its ceremonial best. This #PrideMonth, as WeddingWire celebrates the true essence of love, read how a couple chose to wed amid families and guests - just the way we'd want for ourselves. We all dream of it - a happily ever after to affirm our faith in love and the big powers beyond. An exchange of ties that bind us to our soulmate, our love, in the presence of all that matter to us - our families, friends and the world. And when it all comes through - what we get is sheer perfection. This #Pride month, we came pretty close to this feeling, when we were blessed with the chance to connect with Parag Mehta and Vaibhav Jain and experience their big, fat, gay Indian wedding.

Nearly a year after the decriminalisation of homosexuality in India, getting a gay wedding remains a tricky affair for most same-sex couples. Those who decide to take the plunge feel the pressure of family, society and the general public - in fact, apart from 'Log Kya Kahenge', the bigger concern is to ensure that their gay Indian wedding does not become/make them a laughing stock.

We're proud to say that this couple did it and did it right, with a deeply traditional ceremony, which we hope, becomes a stroke of inspiration for any couple who also believes in "Love is Love".

From Vardaan to Aashirwaad - A True Gay Indian wedding 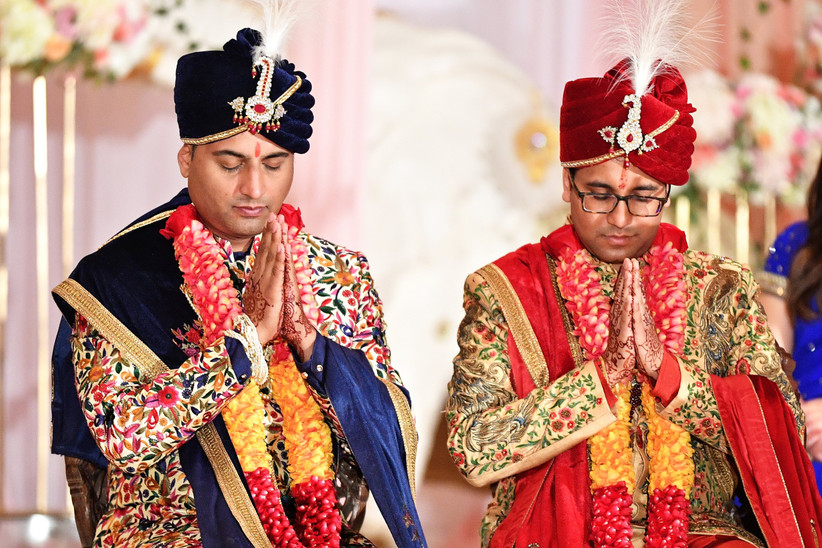 Meet Parag Mehta and Vaibhav Jain, a couple who decided to take the plunge after 6-years of togetherness. Like a true millennial couple, they were clear that they wanted to do it with the blessings of their families. The Texan Parag sent his father to meet Vaibhav's parents during the summer of 2016 when the couple had been together for nearly 4 years.

The Delhi-based Jain had emigrated to the US for his schooling in 2011 and only recently revealed his identity to his parents. And then Parag's mother took matters into her own hands and went over to meet Vaibhav's parents. After a few days, when they asked her what they could gift her, she told them, "All I want is my son's happiness." And that led to the most life-changing and trying experience for every Indian couple - planning a traditional, big, fat Indian wedding. Especially one that had to be just right as a gay Indian wedding. One with its ritualistic Jain ethos (for the #2Jains) and Gujarati ethos (from Parag's end) intact, even as the whirlwind took a life of its own - getting everything from cards to outfits to the Pandit sorted through the roof.

"We wanted to show how serious we are and how a same-sex wedding can be done... We deserve the same respect as a heterosexual couple", said Vaibhav, who took charge of getting the rituals and ceremonies right for his wedding.

Though he admits that they had once thought of a low-key affair, it just did not feel right. "We had grown up in traditional setups - watching Hindu and Jain marriage ceremonies (respectively)", shared Parag. "We had taken part in our cousins' weddings. So, why should we compromise? (With some soul-searching), we found out that we were afraid that we didn't deserve it."

In fact, as Vaibhav pointed out, it was more a testament to both sets of parents, who also took up a lot of the organisational needs for the wedding. They also battled some of their own fears over acceptance through it all.

Also Read: This Same Sex Wedding Story of Keshav Suri and Cyril Feuillebois Has Our Heart "I had a fear of rejection, but my parents had a bigger fear of rejection - they're living in a close-knit Indian setup." In fact, recalling the planning days, Vaibhav said that his father faced a little discomfort, thinking about possible rejection from friends, family and his business community

Meanwhile, Parag's father was looking for a wedding priest from the Jain community to officiate a gay Indian wedding. In the end, they ended up doing what many of us now do for most of our daily needs - they Googled him!

Ceremonially correct - A weekend of faith and culture

How? With two Baraats (a Ghodi and carriage groom on each end), two aisles to the Mandap, a Jaimala ceremony and a Puja (first to the Viganharta Lord Ganesh and then the Navkar and Shanti Mantra).

There were also a few changes - to accommodate and highlight the association of two grooms. Vaibhav, who wrote the beautiful ceremony with his officiant Ashok Sanghavi, said, "If we could change one tradition (that of having both a bride and a groom), then why not others?" 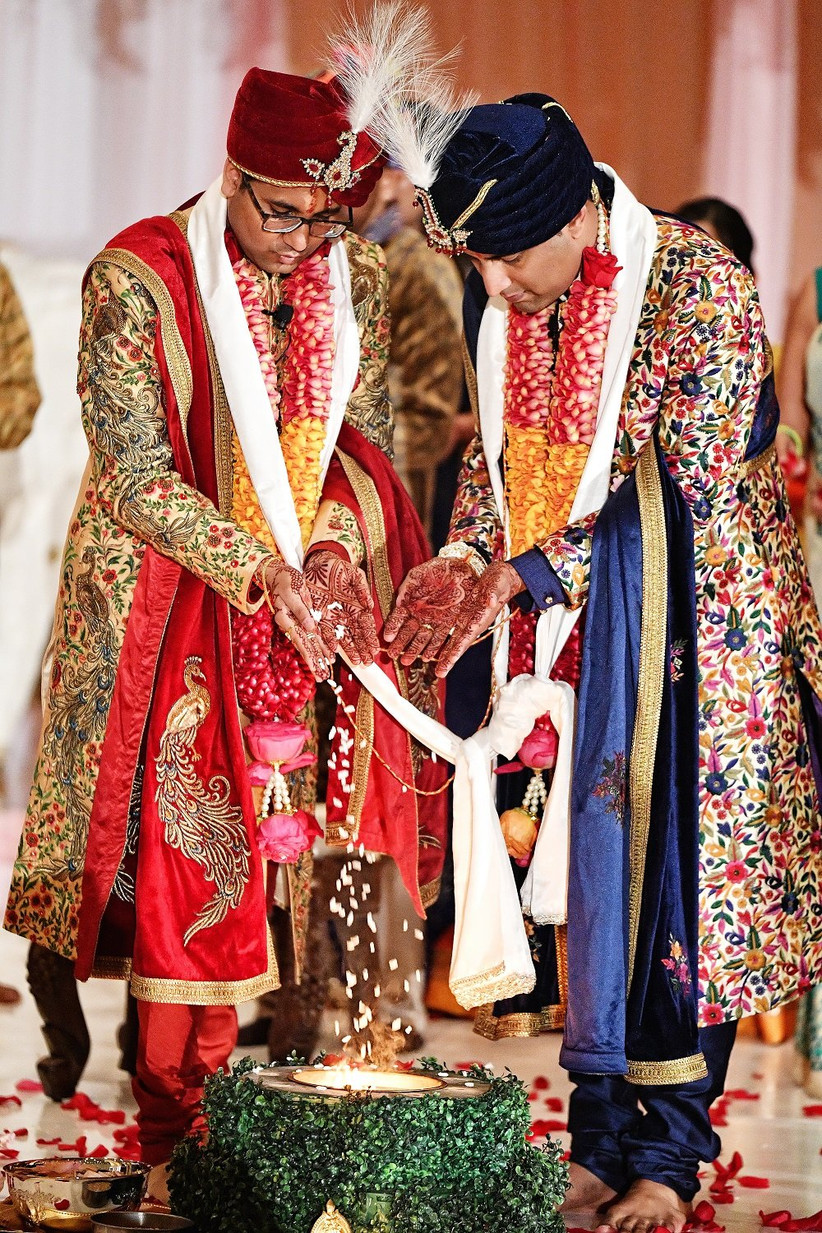 So, the 45-minute ceremony had a Var-Daan (where both the grooms were given away, like a conventional Kanyadaan ceremony), a Chedda Bandhan (like the normal Gath-Bandhan), a Hasta Milaap, a set of Mangal Pheras (like the conventional 4 Jain Pheras), a Saptapadi and an Aashirwaad.

The Var-Daan also had a poignant touch with both sets of parents reciting vows to each of the grooms and giving their respective sons to each other. The fact that the words 'Var-Daan' join up to form the ultimate Indian word for blessings, also underlines this step.

Overall, the couple feels overwhelmed by the support they received from their parents for this gay Indian wedding. "What our parents did is extraordinary", recalled Parag. "But they also did what (we believe) is a parent's only job - to love and support their children." 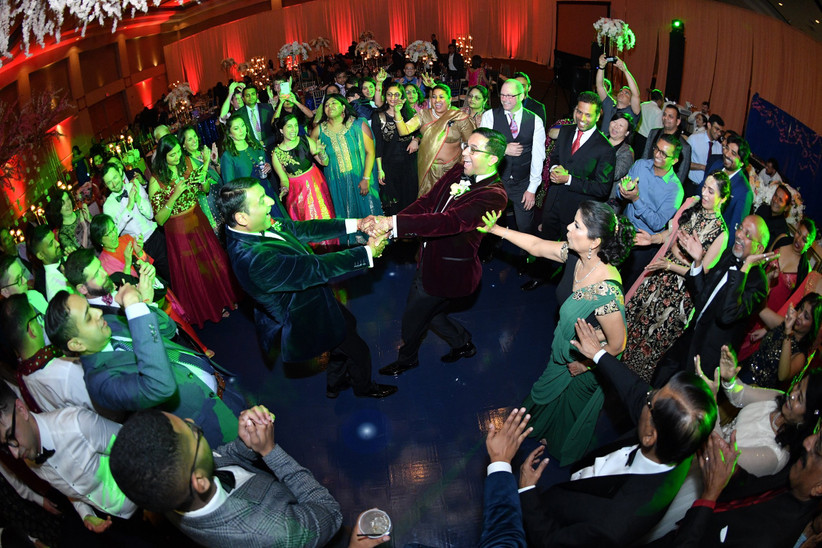 And you know the best part of it all? Standing with them, through it all were all the people who mattered to them - the range of 500 wedding guests from both sides, who stepped in to make it into a truly memorable gay Indian wedding!

"The guests were the wow factor at our wedding", recalls Vaibhav, as he now views the video highlights of that March-end weekend. Whether it was in the way they all stood up for the vows and the mantras or broke loose on the dance floor, the sheer energy and happiness really made the wedding into a truly blissful experience - topping up the elaborate ceremony, explicitly laid out decor and the grand helicopter ride as the finale.

It also proved what they were trying to achieve with such a wedding ceremony.

"Everybody deserves to be loved and supported, with the backing of their families and communities."

A message for everyone 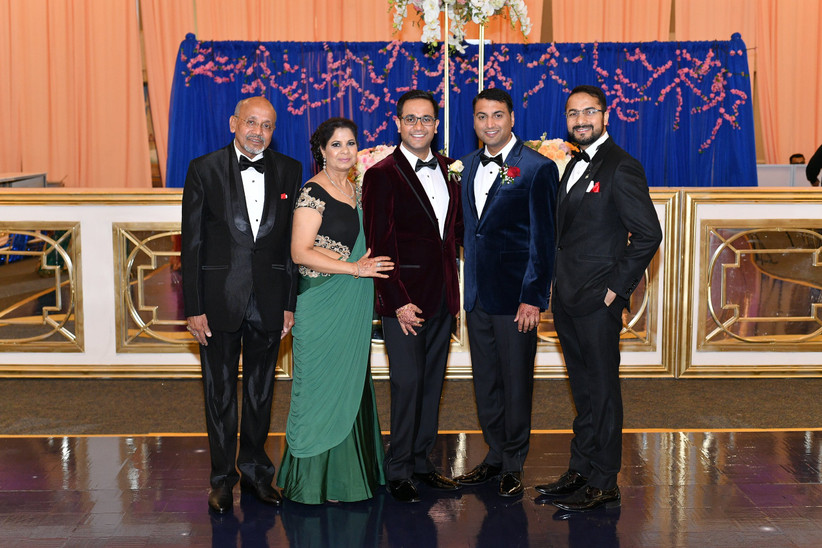 We were truly humbled by the manner in which this real wedded couple chose to share their story with us, hoping that it would inspire others to not just open up to a gay Indian wedding with their hearts, but also support other such individuals among their families and circles.

They're still receiving messages from people who either attended their wedding (as guests or wedding vendors) and others who came across it. "The response has been overwhelmingly positive", shared Vaibhav.

In fact, a few of their vendors (from a bartender at the wedding to staff at a hotel and a few of the people who helped them with the details), wrote back to them about how this gay Indian wedding helped them acknowledge their own identities and those of people around them.

It also brought in a strand of the Shaadi song that Vaibhav had initially thought of for their wedding, 'Pyaar Kiya Toh Darna Kya' from Mughal-e-Azam.

Vendors for the wedding -

All Images provided by Parag Mehta and Vaibhav Jain. 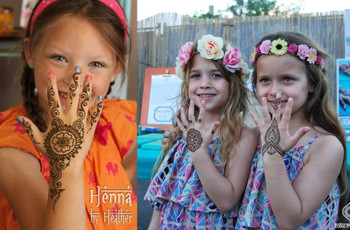 The Bride 29+ Easy Mehndi Designs for Kids that Melt Hearts Applying mehndi on hands & feet are a part of every traditional Indian wedding,... The Bride 25+ Indian Bridal Wear Notes To Influence Your Own Look From Roka to Reception, you deserve nothing less than the best of outfits for... The Bride Short Mehndi Design - 20+ Indian Easy & Short Mehandi Design... As a guest at a wedding, you must have an amazing short mehndi design so that... 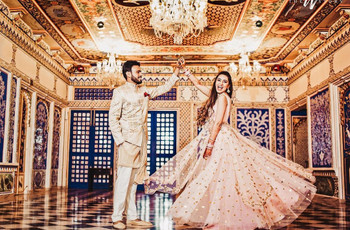