ARE YOU A VENDOR?
A religious wedding

Kanyadaan: Meaning of an Emotional Journey & Importance of Kanyadaan

By Vandini Nirwan March 7, 2021 0
Saved
Every Indian wedding features many ceremonies and rituals but the Kanyadaan is considered to be the most highly valued and the most emotional. We explore the Kanyadaan meaning and how it binds two souls into one.

An Indian traditional wedding is one of the most festive weddings across different cultures in the world. It is also one of the longest because of the different ceremonies, rituals and customs involved. Like any ancient culture, these ceremonies and rituals have religious significance with Kanyadaan being the most religious and the most emotional ritual. Read a little about the seven vows of a wedding as well to understand the Kanyadaan meaning.

Meaning of Kanyadaan in English

The Kanyadaan is one of the most sacred wedding rituals that binds two people into one. A sacred tradition that is carried forward by the father of the bride, a tradition that in its entirety is a beautiful amalgamation of bittersweet emotions, wherein the father of the bride gives away her hand into the groom-to-be.  So, here we throw more light on this sacramental traditional ritual and what the seven vows of a Hindu marriage

The religious meaning of Kanyadaan & significance Hindu culture is rich in mythology and religion. This greatly influences how their customs and celebrations are done. A wedding is definitely one of the most significant celebrations in Hindu culture. A Hindu wedding ritual that carries a significant religious background is the Kanyadaan.

According to Hindu tradition, kanyadaan meaning in hindi -is ti make a donation or a 'Daan' to receive salvation. This could be done in the form of a 'gaudaan' or a cow and a 'kanyadaan' where Kanya' signifies a girl or a virgin.

In the case of a wedding, it is the parents of the bride that have to extend this donation with their daughter as the 'kanyadaan'. In other words, the Kanyadaan meaning is all about parents having to give away their daughter as a form of gift to the groom. This is one ritual that is overdriven by immense emotional value as a father has to let go of the most precious thing known to him - that is his daughter!

Kanyadaan meaning and the Hindu Deities

The groom is considered to be an incarnation of Lord Vishnu and the bride is considered to be a form of Goddess Lakshmi, the deity of wealth and prosperity. This way, according to this tradition, the parents’ sins are forgiven through the merit of this ritual of religious donation.

The Kanyadaan meaning, so is also a gift of wealth and prosperity to the groom for his life ahead.

Kanyadaan meaning and its significance

To “give away” their most precious daughter is not a simple thing to do for any parents especially for the father. The emotional weight of this ceremony greatly affects the father. Here, it is important to understand the mutual feelings that a father-daughter relationship hold. No matter what, daughters are their father’s most prized possessions and he can never stop loving them.

During the Kanyadaan, the father symbolically hands over the responsibility of his daughter to the groom with lots of hope and expectations. The traditional Hindu wedding stretches this part and makes it more emotionally charged through the Kanyadaan ceremony.

Hence, the bride’s father has to go through this entire ceremony in a ritualistic manner of letting go of his daughter. Can you imagine how heavy this must be for a father? We fail to imagine the tumultuous mind and the whirlwind of emotions the father must feel at such a sensitive time where he is letting go of the one thing that he cherished all of his life.

The Kanyadaan ritual is done during the main wedding day ceremony. The father of the bride places the right hand of the bride on top of the right hand of the groom. The presiding priest will put some rice on the joined hands and then the bride’s parents will pour a holy water while the priest sings a Vedic ritual hymn or kanyadaan mantra meaning . The groom will then swear to be loyal and to devote his love to the bride for all his life and he will also sing a Vedic ritual hymn. 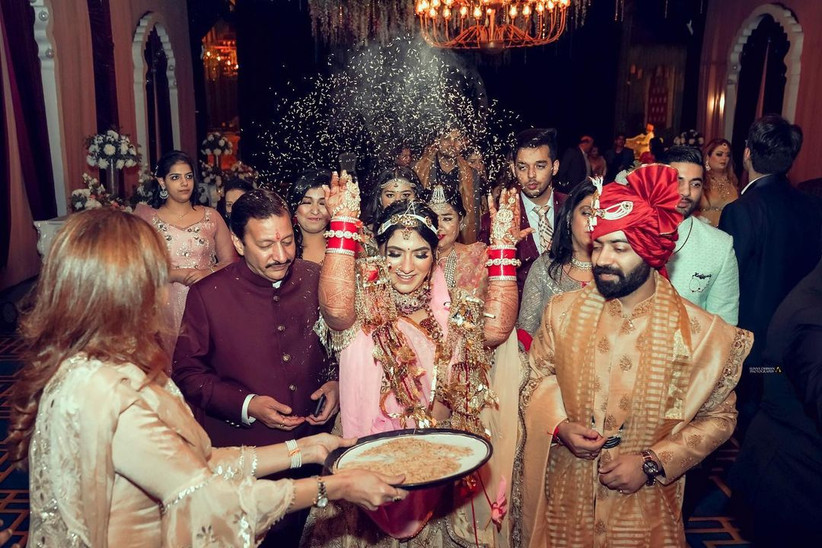 The ceremony ends with the bride finally given over to the care of her groom. Giving away the 'prosperity of their life, their daughter, is considered as the noblest donation possible by a couple and is an emotional moment for everyone who is present. However, this Kanyadaan meaning may only be symbolic as every parent knows that their love and care for their beloved child will never cease at the wedding.

So, it thus becomes a way the father puts the hand of someone who is the most precious thing to him in the world - and he places his trust in the husband-to-be, that he will take care of his daughter better than he could, at least that is what he hopes for to happen. So, the Kanyadaan meaning as seen through the eyes of a father becomes an act of giving away and seeking a promise from the groom to provide for his daughter for as long as he lives and more.

Father-daughter bond and the Kanyadaan meaning

Kanyadaan meaning as a ritual is one of the most sacred wedding rituals without which no Hindu wedding will come to exist. It exemplifies the father-daughter bond and is thus a tradition which invokes very deep-seated emotions and sentiments. And, this photograph is reminiscent of those pure moments of love and ecstasy that is only known to the love and bond that is shared between father and the daughter.

The kanyadaan meaning and the ritual in itself happens to be one of the most sacred of rituals that bind two people into becoming one whole and become a couple and live the rest of their life together. It is the very ceremony that officiates that the father announces that now I give you my daughter to you and that you become the man who has her now. Looking at how important and crucial this moment must be through the sands of time and especially for a father who has spent his entire life in raising a daughter he is so proud of, to give her hand in the hands of another man, who will take her away forever.

So the then the real Kanyadaan meaning becomes laden with cutthroat of emotions and sentiments of the separation of a father with that of his beloved daughter, as she bids goodbye to the home that she has always known to be hers and to move on to become a part of. anew family - away from the place she always called home. We hope you enjoyed reading our take on the real emphasis of the Kanyadaan meaning and what this tumultuous ceremony and wedding rituals would mean for a bride-to-be and her father, whom she has so dearly loved all her life.

So, now that you have read all about this sacred tradition and ritual, be rest assured that this will be one of the most emotional journeys that you and your parents will embark upon. Enjoy your journey and make the most of your last few days with your parents as you can!

Was this read about the Kanyadaan meaning an emotional whirlwind for you? Share your thoughts with us through comments. 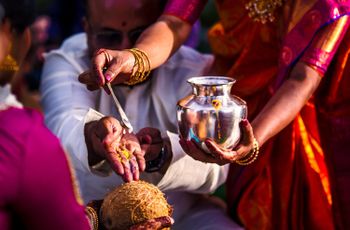 A religious wedding Kanyadaan: Everything That You Should Know About This Hindu... One of the most emotional moments in a women’s life and that of her parents is... 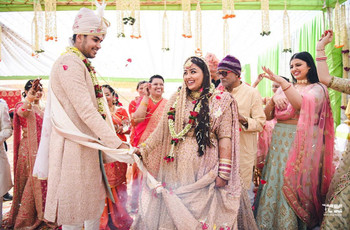 A religious wedding Saat Phere, Their Meaning and the Significance They Hold for... In a Hindu marriage ceremony, the Pheras are the seven sacred rounds that the... 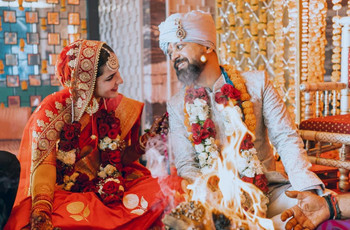 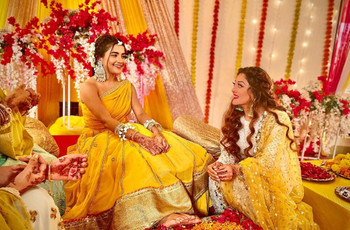 A religious wedding Choosing a Perfect Venue for Haldi Ceremony The type of venue matters a lot for this generation. So here we bring some...
See more articles