Kerala Wedding: The Traditions Of Wedding In God's Own Country | Wedding Tips ARE YOU A VENDOR?
Wedding traditions

Kerala Wedding: The Traditions Of Wedding In God's Own Country

By Kriti Gulati September 17, 2018 0
Saved
Knowing people begins with knowing about their food, outfits and ceremonies. Explore the last with this deep-dive into wedding ceremonies for the four core communities in Kerala.

Kerala is truly God’s own country. With backdrops that include gorgeous beaches, backwaters, coconut and palm trees and greenery grasslands, Kerala has something for everyone. Just like a variety in backdrops, Kerala is also home to a variety of cultures and religions. And these come to light when you decide to look into them, via their customs and traditions for one of the core threads to the society - weddings.

In this article, we explore Kerala wedding ceremonies, as they occur across the four prominent communities here. Sit back and immerse yourself in this thread, which often forms a cherished web of memories for everyone involved.

Kerala wedding ceremonies of the Nair weddings are known to be concise and extremely simple. They have very few rituals compared to other traditional Indian weddings. Most traditional Kerala Nair weddings take place in a temple, amid friends, family and in the divine presence.

A traditional engagement is a part of the Kerala wedding ceremonies over here becomes the Nischayam. The two families celebrate the happy occasion by exchanging the bride and groom’s matched and approved horoscopes.

After this, a Mothiram Maattal takes place, which is a traditional name for the ring ceremony. Gifts exchanged over her include the bridal ornaments.

The bridal Mehndi ceremony is similar to other Mehndi ceremonies across India. Contrary to a conventional Mehndi function, where artists are called in to apply intricate patterns, in Kerala wedding ceremonies the bride's aunts begin to draw pretty patterns on her hands and feet. An artist may take up after some time.

This ceremony is performed by the bride and groom, right before they leave for the wedding venue. They seek blessings from all the elders of the house. The Dakshina is a symbol of the elders’ blessings.

The mainstay of a Kerala wedding for a Nair couple is loosely termed the Kanyadaan. It begins with a ceremonial welcome for the groom and his family, followed by the blushing bride's beatific entry. (We especially loved this boat entry by Wishtree Weddings).

Then, we get down to the serious ceremonial tasks. The family priest takes his post and performs the holy ceremony, with the bride's father handing over his daughter to her husband (literally).

After the wedding, the father of the groom gives him a Mangalsutra to tie around the bride’s neck. This is known as a Thalikettu and add to the gleam of the bride's traditional Kerala wedding jewellery sets.

A gift seals the deal. For a Nair Kerala wedding, this occurs in the Pudamuri ritual, where the groom gifts his bride a saree on a platter. This symbolic gesture marks that he would forever act as a provider for her. 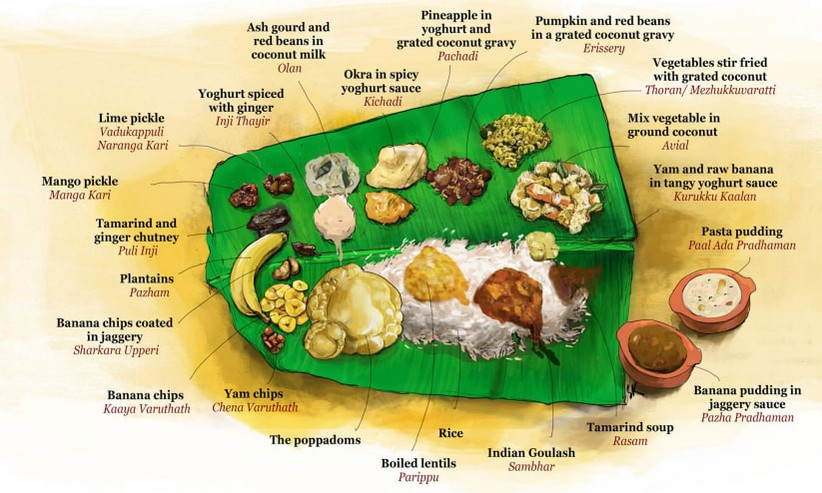 A typical Nair wedding meal that is served during Kerala wedding ceremonies is known as Sadhya which consists of 25 dishes served on a banana leaf. The elaborate meal consists of a variety of rice, pickles, curry and sweets.

In contrast to Punjabi wedding traditions or even Marwari wedding traditions, the main event after the wedding is not a tearful Vidaai ceremony. It's the happy Griha Pravesh. Here, the bride enters her new home with her husband during a pre-ordained Mahuratam (auspicious time). She lights the way in, with a traditional lamp in her hand, with the act known as Kudivep. It is one of the most auspicious rituals of Kerala wedding ceremonies.

Though the essence of Muslim Kerala wedding ceremonies is the core Islamic Nikaah, it does take some cultural undertones specific to the region. The brides may choose a bridal silk saree rather than a Sharara, Gharara, salwar suit or  bridal lehenga. The Malayalam bend may shine through, not just in traditions, but also aspects like music, food and festivities.

This ritual in the Kerala wedding ceremonies, traditionally means ‘wearing the bangle’ where the groom’s mother gifts the bride with a set of gold bangles. This gift is a mark of commitment for the alliance too.,

The Naal Nischayam is a formal inking for the alliance. It's literally the moment when the elders of the family fix the wedding date. This is usually hosted at the home of the groom.

This is a traditional name for the Mehndi function for this community. Family and friends get together at the bride’s house, where a Mailanchi (Mehndi expert) decorates the bride’s hands and feet. The elders sing traditional folk songs known as Mappila Paattu.

The wedding is an official marriage contract that is solemnised either at a mosque or a banquet hall. The priest presides over the ceremony, reciting prayers from the Quran. With agreement from both the bride and groom, he receives signatures on the marriage register and inks the marriage in himself.

The bride receives a Mehr (or Mahr), a mandatory bride price or dowry for the marriage. It symbolically represents a promise of wellbeing from the groom to her father, guaranteeing that he would take care of her. This amount (be it a financial figure, property or material possessions) is inked into the marriage contract or Nikaahnama.

After the Nikaah is over, the bride’s father gives her hand to the groom. This is his way of requesting the groom to take good care of his daughter. This ceremony is followed by Daawat-e-Walima, which is a grand feast for all the guests.

Since the Ezhavas are the majority Hindu community in Kerala, they have their own customs and traditions and marks an integral part of Kerala wedding ceremonies.

Like with a Nair wedding, the Nischayam represents the engagement ceremony. The elders of the family of the bride and groom fix a date for engagement and wedding. Token sweets are meant to make it a happy memory indeed..

In this ceremony, the bride seeks blessings from all the elders in her family, before her forthcoming union.

Ahead of the wedding festivities, the bride and groom receive blessings from their near and dear ones. This marks the beginning of the wedding whirlwind as well.

Since applying Mehndi is considered auspicious for the bride, this ceremony is an important one and is held a day before the wedding.

During the wedding ceremonies, the bride and the groom are not allowed to see each other. The bridal entry happens in a dainty basket, bearing a bounty of gifts. As the ceremonies continue, her father gives her away to the groom and may even symbolically wash his feet.

The Mangalsutra is a mark of matrimony, even in this wedding ceremony. After the prayers to solemnise the match, the groom ties a Mangalsutra around the bride’s neck.

In this ritual, the couple exchange garlands, offer prayers and solemnise their union in the midst of their families, familial gods and the Holy fire.

The Saptapadi are the seven steps that the couple take together to begin their journey together. Quite like the 7 pheras, these seven steps are to mark their togetherness in sickness, health and towards hearth and home.

In the end, the couple has to circle the fire, seven times.

The elaborate wedding is followed by a reception party also known as Salkaaram.

In Kerala, a Christian wedding is known for its simplicity. The bridal outfits include a traditional touch, while the affair is more homely in nature, held in the tender embrace of friends and family.

The Aachaarakalyanam is a traditional ceremony that initiates the wedding rituals. All the elders from the bride’s family visit the groom’s family to fix the date for the wedding.

Before the bride and groom proceed to the church for their wedding, they have a prayer session called Sthuthi Cholluka, followed by Gurudakshina where they take the blessings of the elders of their families.

The bride and groom along with their families reach the church on the wedding day. The bride usually wears a cream and gold Saree, adorned with gold ornaments. Soon the priest performs the wedding ceremony by reading the Holy Bible. After that, the couple exchange wedding rings. After that, the groom ties a Mangalsutra around the neck of the bride. This is followed by a grand feast.

Now that you’ve learnt all about Kerala wedding ceremonies and traditions do comment below if we have missed out on some important tradition or ritual.

You too can host your wedding at a stunning venue, if a destination wedding in Kerala isn’t an option for you. 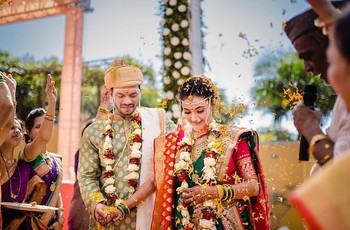 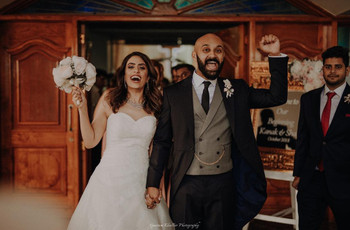 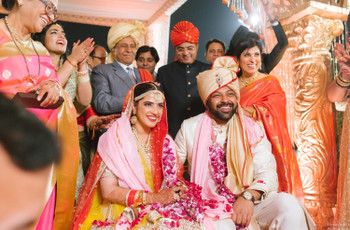