Here's the Who-Wore-What from Armaan & Anissa's Star-studded Reception | Wedding Tips ARE YOU A VENDOR?
Wedding fashion 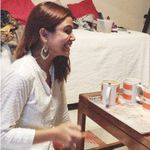 By Anwesha Das February 11, 2020 0
Saved Save
#Anissamaangayi was a star-studded reception with Tinsel town's celebs flaunting some ace designs. If you are looking for the deets for inspiration, this is where you should be! 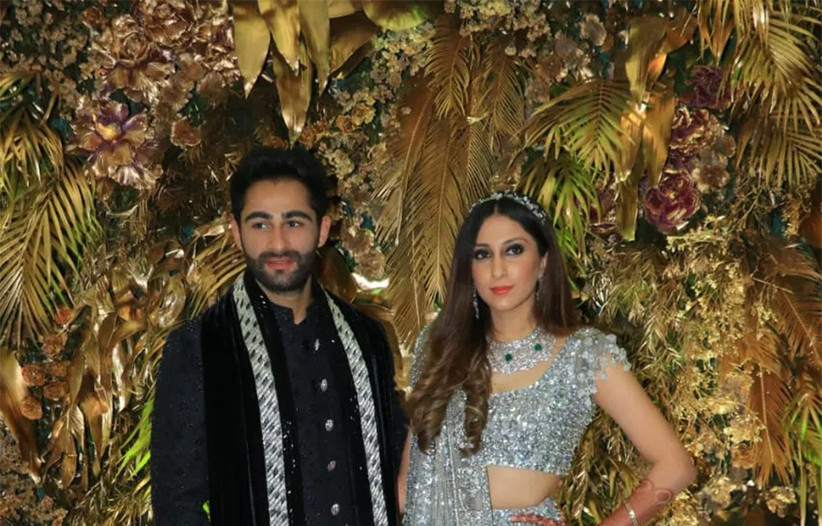 Are you on Google looking for the itty bitty details of the who's who of B-town who graced the fancy-schmancy reception of #Anissamaangayi? You'll be glad to know you've landed in the right place! With the prevalent theme being pastels for the wedding looks followed by the reception's #OOTN being bling and sheen, the heartthrobs and beauties of Bollywood have walked up the carpet looking as glamourous as ever flaunting every piece of couture that they picked for the night!

Here are the deets of the looks that were seen on Armaan Jain and Anissa's reception night that followed their absolute fairytale wedding! The crystal work that intricately runs through the gorgeous lehenga is a masterpiece that is created by none other than Manish Malhotra. The diamond-studded tiara with the diamond choker and danglers are the perfect accessories that complete this stellar look. We are loving the contrast that her Chura is adding to the look and of course the bounce in her tresses! 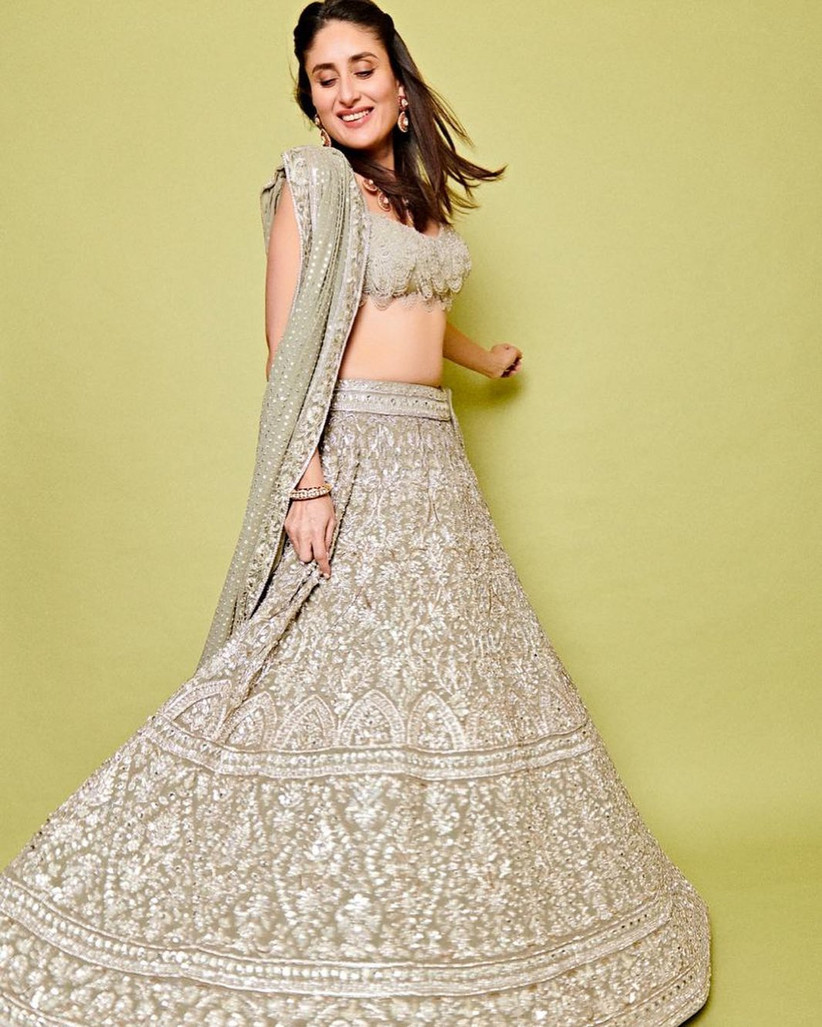 Kareena Kapoor Khan flaunts a twirl in her intricate handcrafted silver crystal lehenga with the scallop of crystals on the top that looks oh-so-perfect for any summer night wedding! The stunner that she is, she was seen performing on Bole Chudiyan in her classic Poo avatar from K3G and how we loved it! 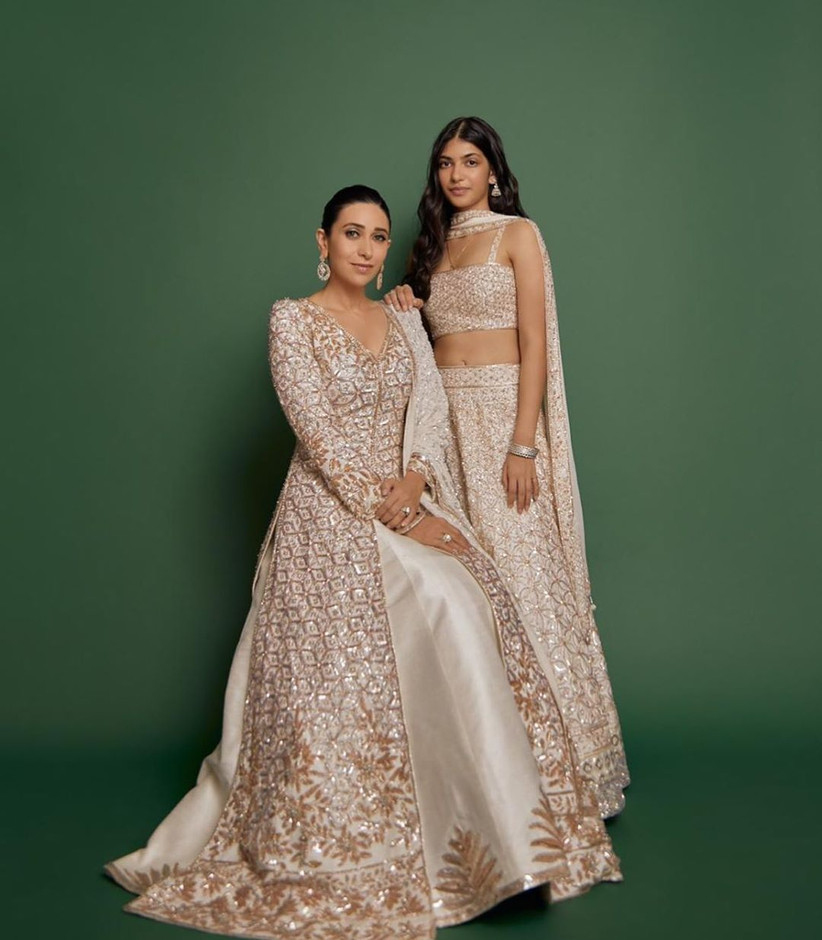 The mother-daughter duo chose to show off a classic white and gold combination for the reception night. Karishma Kapoor walked in wearing an eccentric ivory dress with impeccable work of Zardosi on it and a heavy work dupatta over one shoulder. Samiera Kapoor was on similar lines of her Mumma dearest in a Manish Malhotra lehenga. What a cutie! Making their own share of news, this famous duo who are rumoured to tie the knot in a beach wedding was seen waving at the paparazzi in sizzling black outfits. The ruffled black top with the shimmery lehenga and the gorgeous net dupatta that was topped by ruffles in the border made Natasha Dalal look WOW. Varun Dhawan is matching the glam factor with his beloved in a piece created by none other than Abu Jani Sandeep Khosla! Whistles! Another B-town beaut walked down the glam street wearing a Manish Malhotra piece. The pastel sorbet colour lehenga that was handcrafted at Manish Malhotra World was topped by the Maang Tikka from Manish Malhotra jewellery making her look ethereal. Her simplicity will be the death of us! 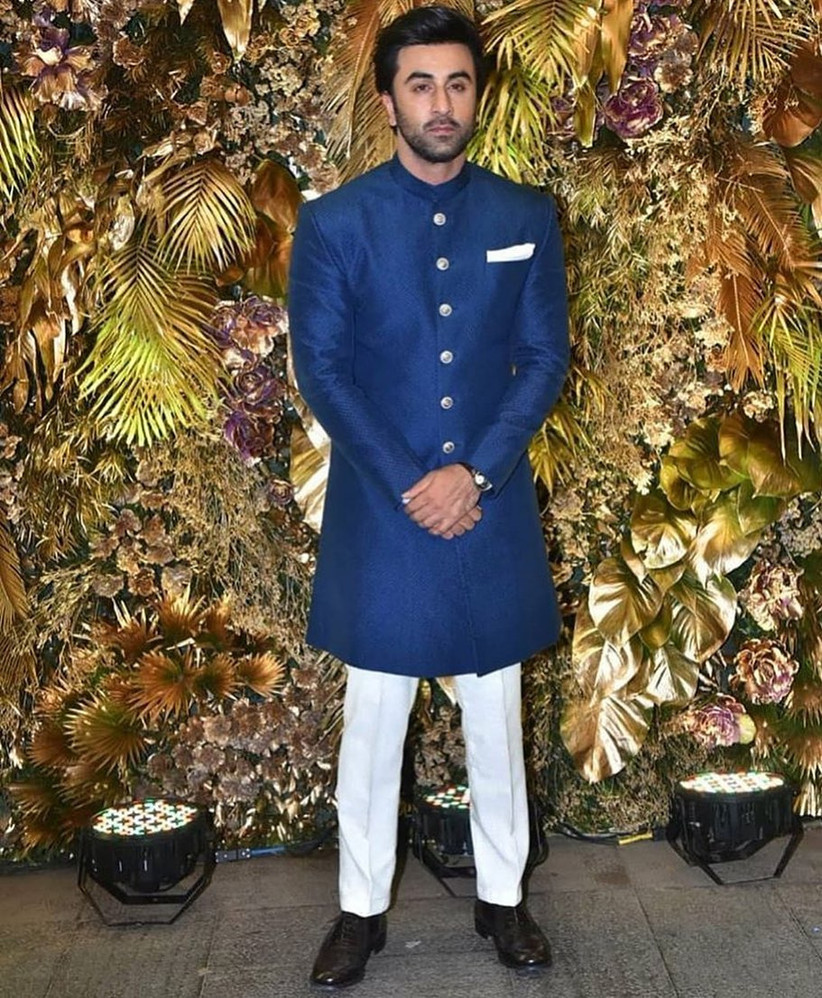 Not far behind Alia Bhatt, Ranbir Kapoor was seen walking into the reception at The Grand Hyatt and so was his evergreen mother, Neetu Kapoor. The classic blue shade was declared the Pantone colour of the year and this Bandhgala was designed by the ace designer, Sabyasachi. We will reiterate how weddings are so incomplete without Sabyasachi and the bride herself is a living example who walked down the aisle in a red Sabyasachi lehenga on her wedding! Karan Johar is known for a million different things and one of them is his styling that leaves behind a remarkable benchmark to follow! Like the other pre-dominant faces of Tinsel Town, Kjo was seen in a velvet sherwani that had gorgeous detailing with golden buttons and was accessorised by his signature shoes and a heavy shawl with intricate floral design on it. We missed his pout on camera though! This ornate piece has been designed by Manish Malhotra World. This handcrafted lehenga in ivory is decorated with soft gold threadwork and this is what makes this a tale of classic elegance that leaves us awestruck. Did you know Potli bags and their association with Indian weddings is an inevitable affair? If you still doubted it, the stunning Tara Sutaria is here to prove that designer Potli bags are a basic necessity to complete the traditional look! Picked straight from the runway of Kresha Bajaj, this Marin Lehenga that was picked by Ananya Panday was named after the “star of the sea.” Making it all the more elaborate is the embroidery in metal-beaten sequins that run throughout, matte beads and glass crystals which are intricately sewn on to create the shape of waves. If you look closely, the lehenga has star and shell motifs running throughout. TBH she looks divine! 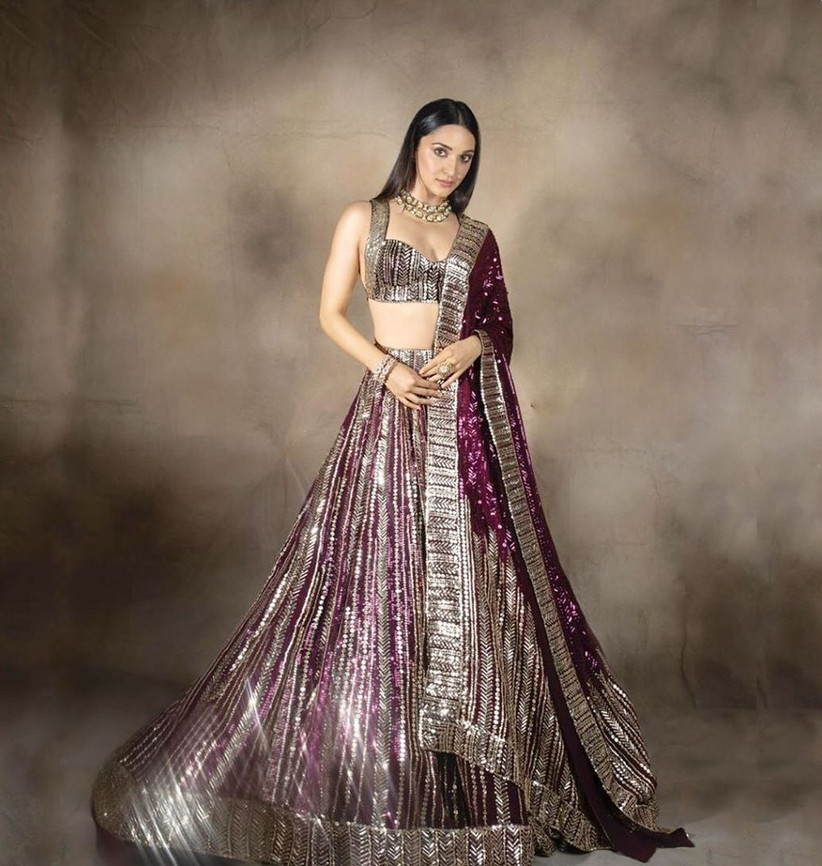 Hopping on the Manish Malhotra bandwagon, Kiara Advani had worn a gorgeous Manish Malhotra lehenga on the wedding and following that she flaunted this absolute work of art that was again created by Manish Malhotra and his label, Manish Malhotra World. This magenta lehenga with a sweetheart neck blouse and the silver contrast is everything perfect for a reception or a cocktail look! Manish Malhotra Jewellery and a matching Potli bag completed her look for the night! This hand-embroidered saree that is bejewelled by 3D pearl tassels, was crafted out of 350 hours of work as has been told by Mala & Kinnary on their Instagram. This embroidered saree is paired with a ruched pure chiffon blouse. Keeping the accessories minimal brought out the magic in the saree in the best ways possible making Shilpa Shetty Kundra look delicate and dainty.

The Akhiyon se Goli Maare star, Raveena Tandon, looked ravishing as ever in her 9 yards, that was designed by Jade by Monica and Karishma. The subtle copper and charcoal work in the borders with threadwork detailing on the Pallu makes this Chikan-work saree worth adoring! The off-shoulder blouse adds to the sexy of the sequin work in black and diamond jewellery will work wonders with it! 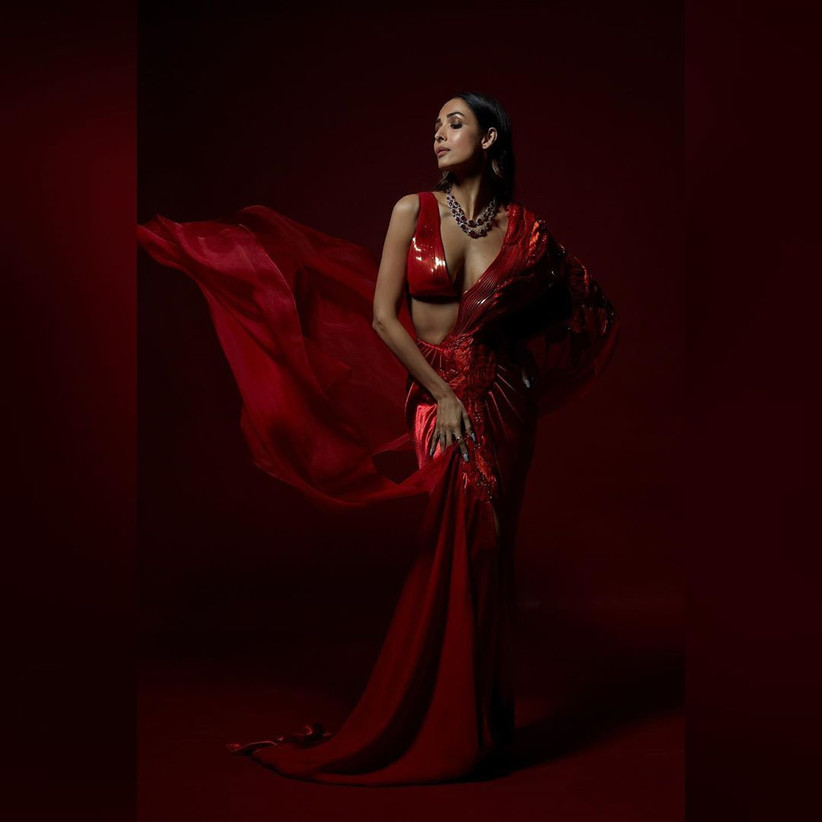 The hotness quotient of this look is beyond words for us to express and who else could pull this off so brilliantly if not Malaika Arora! From the Amit Aggarwal Couture collection called LUMEN, this pre-stitched red beauty was surely a head-turner at the reception. She sizzles in a scintillating diamond and ruby necklace and a delicate cocktail ring from Farah Khan World's limited-edition couture collection making it all the more steal-the-show-worthy! 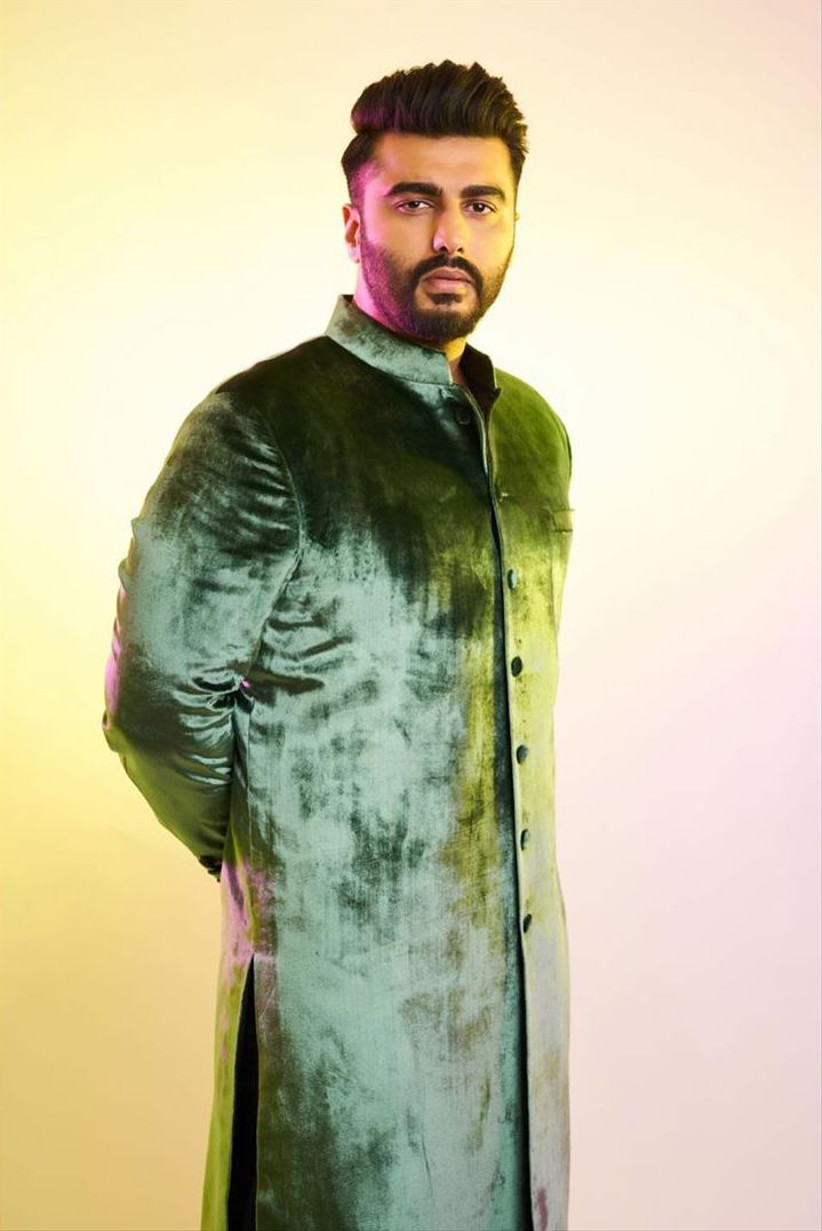 To match the sheen of Malaika Arora while walking in hand-in-hand, this B-Town's "Best Friend" was seen in a pistachio piece from Manish Malhotra World. The velvet Bandhgala was styled by one of Bollywood celebs' favourite stylist - Nikita Jaisinghani. He did look classy with the outfit matching his personality and of course, that poker face! 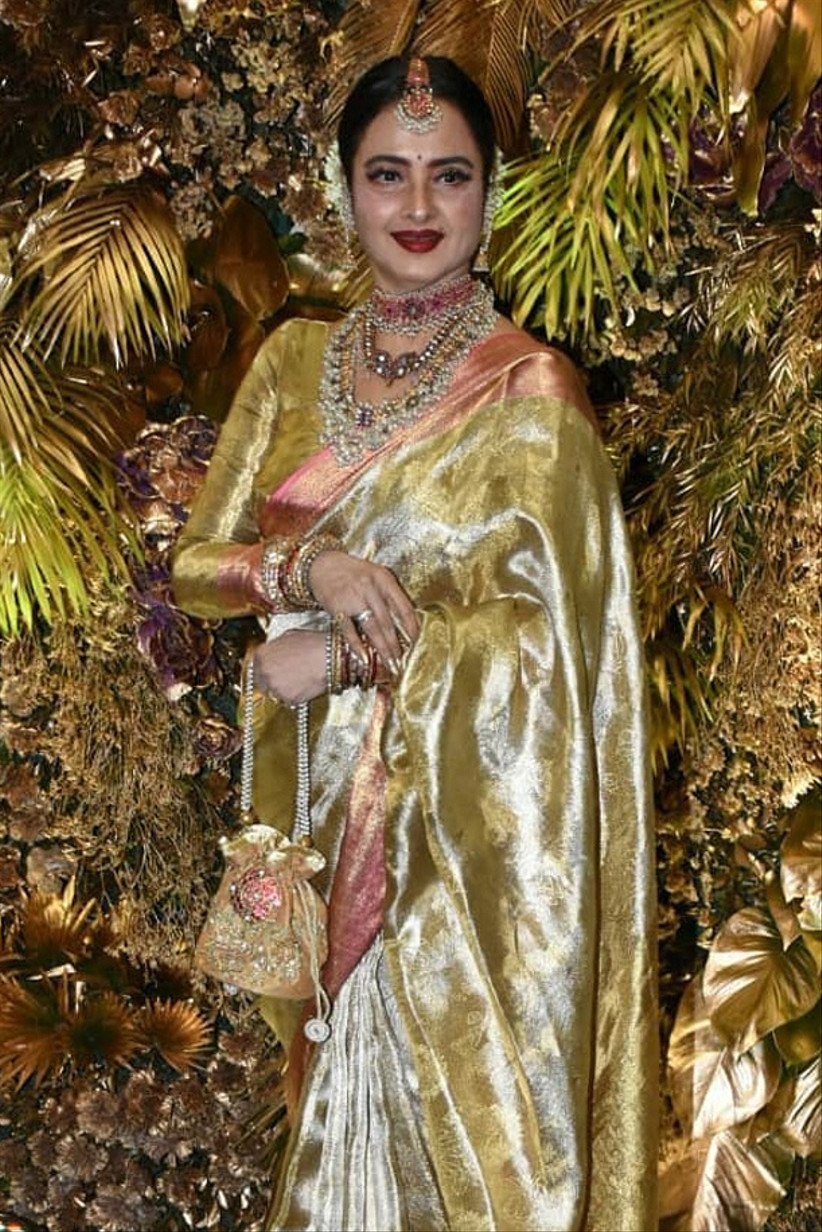 Known for her classic style and elegance, the ever beautiful star with a million classics like In Aakhon ki Masti Mey, she left us at a loss of words in her golden Kanjeevaram saree. From her jewellery to her Juda and that one-in-a-million signature lipstick shade, we can never get enough of this look. Do you know of another seraphic woman who looks this sublime in Kanjeevaram? Because we don't! 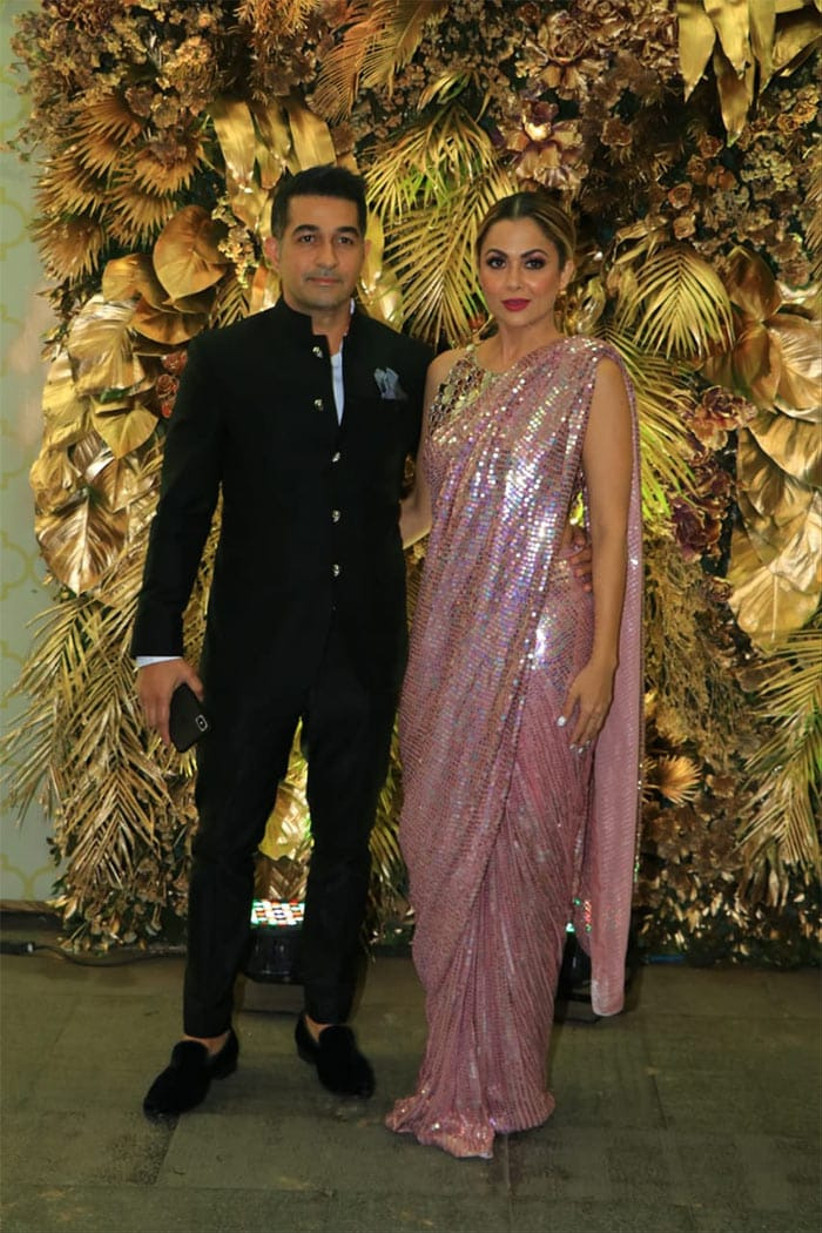 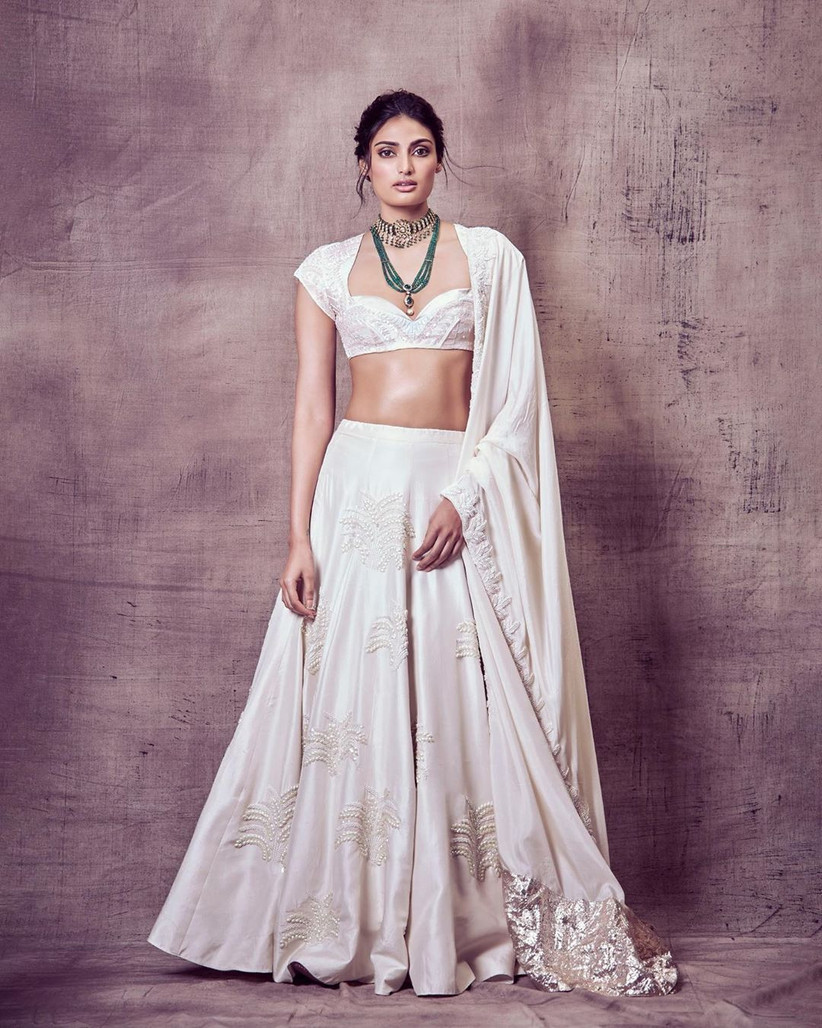 First, we love that choker and necklace that she picked from Amrapali Jewels. Coming to the gorgeous piece that she is wearing - it is designed by none other than the ever-talented designer, Masaba Gupta. The couture brand House of Masaba has created a surreal ivory lehenga with pearl embellishments and the minimal designing on the fabric that has its own subtle sheen makes Athiya look lovely!

Siddharth Malhotra has given us #goals with this black Indo-western look that was designed by Shantanu & Nikhil. The minimalist look with the golden brooch is a treat to look at and every groom-to-be or his best man should take inspiration from this look because we are drooling! Soha Ali Khan Pataudi and husband, Kunal Khemu have graced the night in their designer attired created by Shehla Khan and Kunal Anil Tanna respectively. The subtle peach lehenga with the pop of floral motifs is a treat for the bridesmaid attire. The intricate Chikankari work on the Nehru Jacket that Khemu wore was a work of pure art!

We will have to jump to the conclusion that B-town's favourite designer for the #Anissamaangayi reception has to be Manish Malhotra with so many celebs opting for his stunning designs! The celebrities have set impeccable benchmarks when you look at the different outfits that they have ostentatiously displayed on this star-studded night.

We love what we see and it is indeed a definite source of inspiration set by the first celebrity wedding of 2020 and we cannot keep calm! If you want to design a dreamy outfit for your wedding or your BFF's get it touch with the ace designers on board with us! 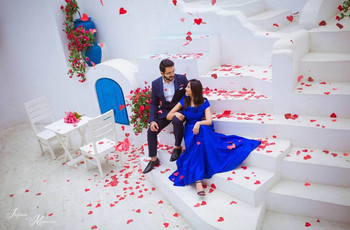 Wedding fashion Up the Bong Swag With These Essential Bengali Dressing Style... What makes a Bong Bodhu click? What's the secret behind a Bengali groom's... The wedding ceremony Star-studded Wedding Celebrations of Armaan & Anissa Will... Being the first celebrity wedding of 2020, Armaan & Anissa's wedding is all over... The wedding banquet Wed in Style! 5 Star Hotels in Bangalore You Must Check Now If you're planning to have a lavish wedding, you must do everything in style!...
See more articles